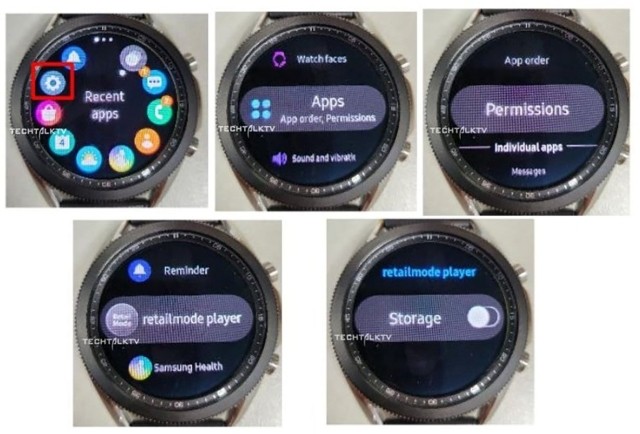 While the presentation of the Galaxy Watch 3 is expected in the coming weeks, photos posted on Twitter point to a redesign of its software interface,Tizen OS.

Samsung should present in the coming weeks its new connected watch, which should succeed the Galaxy Watch Active 2  : the Galaxy Watch 3. If we have already been able to discover it through photos published by the Korean communications’ certification agency, these are other photos that were put online on Monday on Twitter.

We can discover a design close to that already seen in the photos of the Korean organization, with a watch with a thin rotating bezel, like the first Galaxy Watch, and two buttons on the side. This time, however, the watch is turned on and thus lets glimpse the software interface. Enough to tell us that Samsung should redesign Tizen OS, its operating system used for connected watches.

Indeed, if we find an identical navigation system, with application icons present all around the screen, the navigation within the menus themselves seems to have been modified, in particular with the highlighting of the highlighted option. “If you can see it, the app icons for Calendar and Galaxy Store apps have a slightly different design. This seems to indicate a new version of Tizen OS which could be released at the same time as the future connected watch, “ says Sam Mobile.

As a reminder, the Samsung Galaxy Watch 3 should be available in two formats, 41 and 45 mm, with a battery of 247 mAh or 340 mAh depending on the version. It would be equipped with 8 GB of storage, 1 GB of RAM, a GPS chip and 4G compatibility. It should also include an electrocardiogram and a heart rate reader.

The Samsung watch should be presented during the month of July, along with the company’s future Galaxy Buds Live headphones, in the shape of beans.

How to share files wirelessly between smartphone and PC

Here are the secrets of social network TikTok's algorithm

Before the déconfinement, it should meet these 3 criteria