Home > Laptops > Millenium ML3 R207Q review, this gaming laptop has almost everything to make a hit 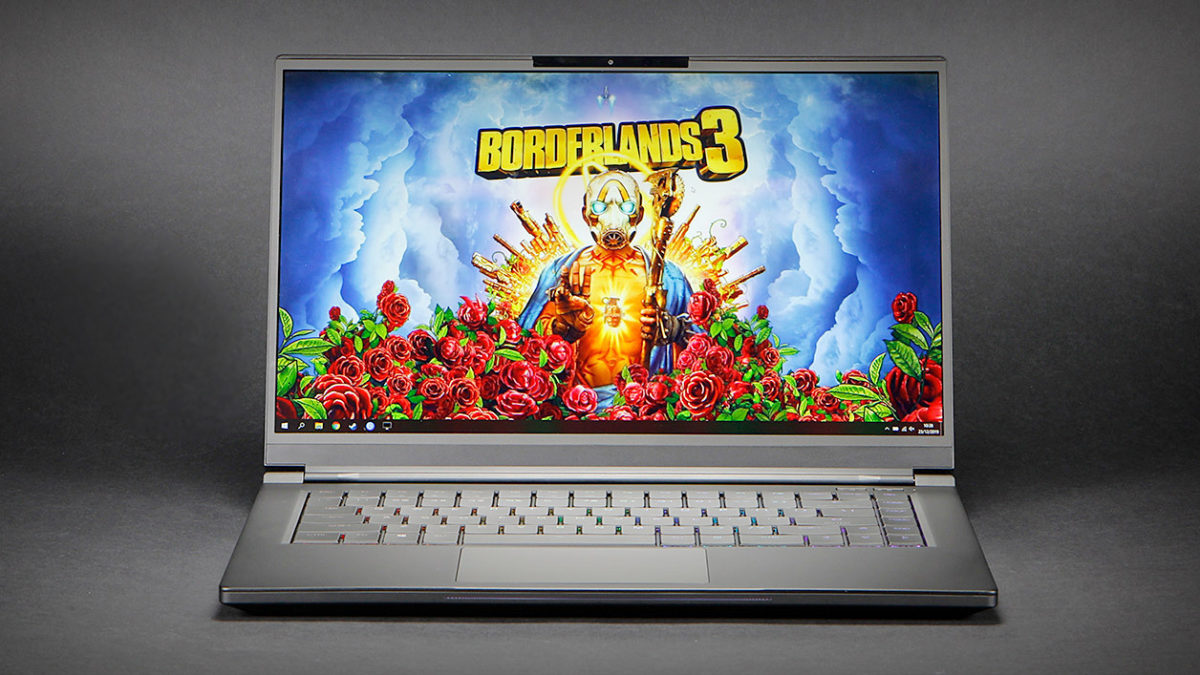 The ML3 is the first 15.6 inch laptop from the Millenium team and it was designed in partnership with Intel. In fact, the machine has the code name NUC QC71B and was designed by Intel, created by its manufacturing partners and then offered to different brands. Millenium jumped at the opportunity to build a collection of PCs with its effigy.

According to our information, the ML3 will be available in two models and the differences will be sought in terms of the amount of storage and the power of the graphics.

Intel sent us the ML3-R207Q, the highest-end reference that should arrive very quickly at the FNAC at a price of 2390 euros. Note however that, unlike this test unit, the version sold will have 1 TB of SSD in RAID 0 and not 500 GB as it was the case for us.

Simplicity, efficiency, sobriety. These are the first three impressions that inspire us this ML3 laptop from Millenium. The electronic sports team is a newcomer to the teeming jungle of gaming machines and it uses the services of a juggernaut to make its first passes. Millenium has affixed its brand and chosen the components to embed in this PC but it was imagined and designed by Intel, like the mini PCs NUC.

To appeal to as many people as possible, the ML3’s casing is coated with a metal alloy (aluminum and magnesium). It is successful, we are conquered. Only the edge of the 15.6 inch screen frame is plastic. The anthracite gray finish is successful and extends to the whole machine. LED side, there is a simple light strip on the front of the device and that’s it. For the well known ostentatious side of gaming laptops, we will go back and it is not worse. The ML3 can blend in with both professional and personal decor.

In hand, the laptop offers a very pleasant feeling of solidity. Only the underside of the laptop is a bit more flexible than the rest, as is usually the case. For a 15.6 inch, this beautiful devil is quite light. It only weighs 1.86 kg (30% lighter than the average). Its thickness also remains very reasonable: 2.4 cm (almost 15% thinner than its competitors). What about the AC adapter? Almost a “featherweight” for a gaming PC! Only 786 grams displayed on the scale. Let’s go straight to what is annoying: the positioning of part of the connectors. How can a sports team accept that two USB 3.0 sockets (out of three) are on the right side of a gaming laptop? This is where the external mouse will come and run for hours! And it has every chance of hitting the sockets of any connected devices. For us, it is unacceptable. 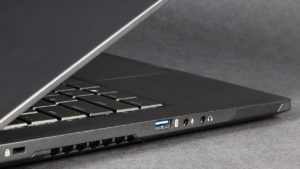 It is however awarded a first good point for having put the rear HDMI video output, the network jack, USB Type-C (Thunderbolt 3 and which can also be used as DisplayPort video output) and the orifice for the AC adapter. In terms of wireless connection, Wi-Fi 6 is there, as is Bluetooth 5.0.

A nice keyboard, to light up yourself

The ML3 is not immune to LEDs, inseparable from gaming machines. Colors, there are plenty under the keyboard, a real farandole. And since you can customize the lighting in many different ways, there is something to enjoy and find combinations that will satisfy all tastes.

The keys are of a good size and adopt a very slightly hollowed shape. They emit a slight mechanical click (for night game sessions, it is validated) and offer a very good race, short, fast and efficient. That’s all it takes to satisfy both first-person shooter (FPS) fans, but also online gamers, budding adventurers and even top strategists. Special mention to the very long left SHIFT key, which falls really well under the little finger whether you have large or small hands. 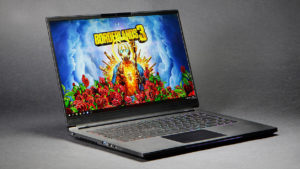 The touchpad is nice, but should have been a little less tall and wide. And for good reason: it will not be used for gaming use. Planing would have made it possible to lower the keyboard a little more and perhaps to play a little more on the size of certain keys. Or add shortcuts on the top of the board. An idea for the next version!

Good point, it is possible to cut the touchpad quickly and simply by tapping the small diode located at the top left of the sliding surface. You can also use the appropriate keyboard shortcut if necessary. Disabling the touchpad is essential: it prevents accidental touching with the left hand in full swing. Enough to be sure to move the viewfinder only with the gaming mouse connected to the machine and nothing else.

ML3 Screen: speed at the expense of accuracy

A good gaming machine needs to have a screen up to par. Especially when it costs more than 2000 euros. The ML3 is equipped with a 15.6 inch diagonal panel with thin side edges, which displays a Full HD definition (1920 by 1080 pixels). It offers a refresh rate of 144 Hz (144 refreshes per second), which is more and more requested by the players so that the display fluidity is as pleasant as possible.

To go hand in hand with this speed, it should be noted that the screen is G-Sync compatible, which will allow the screen to be based on the number of frames per second generated by the graphics card to avoid the effects of tearing (tearing of the ‘image) and slowdowns in games.

At first glance, the screen is an illusion. The colors are bright, the brightness seems intense but as soon as we apply our test probe, it reveals its … dark side. Only 289 cd / m2 of maximum average brightness. This is little. We note that there is a nice tip at 311 cd / m2 in the center of the slab but on the rest of the surface, the brightness is much lower.

The contrast ratio rises above 1000: 1, but remains below the average observed recently (1096: 1) on competing PCs. As for homogeneity, it is catastrophic. We measured it at 0.139 (the closer we are to absolute 0 the better) and this is explained by the presence at the bottom right of a significant clouding effect (white spot) which spoils everything.

On the color fidelity side, it’s better. Delta E is 3.39 – an average value – with a clear predominance of reds and oranges. The temperature of the panel flirts with the 6500K almost all the time which is good. Same observation for the gamma whose average value is 2.18 (2.2 being the standard). It should be noted all the same that we noticed beautiful oscillations depending on the intensity of the light signal (up to 2.55) and that is not great.

The configuration of the ML3 sticks to the current standards of gaming machines at more than 2000 euros. It consists of a ninth generation Intel Core i7 processor, 16 GB of DDR4 memory, 1 TB of SSD in RAID 0 (500 GB on our test unit) and an Nvidia GeForce RTX 2070 Max graphics card. Q. As a reminder, this model is less powerful than the classic RTX 2070 but for a Full HD panel and give you a good overview of what ray tracing brings to compatible games, it’s all good.

Comparing the Millenium ML3 (in purple on the graph) to the competition, its performance is very close to that of the 2019 HP Omen 15 2019 and the Lenovo Legion Y740 on most other apps. And for good reason: the configurations are almost the same, apart from the storage device.

The ML3 overcomes all applications, even the most specialized (3D, editing, editing, etc.). In games, same observation, the ML3 goes everywhere, and manages to generate up to 300 images per second (ips), in old games with all the options set thoroughly. Count between 100 and 200 fps in the most played esports titles currently, with high levels of detail (but not maximum).

On the new licenses, with very heavy graphics engines, the scores oscillate between 78 and 100 frames per second, depending on the API used (DirectX 11 or 12) in our test games. The levels of details are set to High or Ultra depending on the titles, as usual.

Does ML3 suffer from throttling ? No. On the other hand, on a session of 15 minutes of intense stress on the CPU and the GPU, the frequencies make the yo-yo permanently. And the more time passes, the less the Turbo Boost starts. But, in the end, hearts still beat above the base frequency of the processor, given for 2.6 GHz by Intel. It is rare and it deserves a good point.

Intel and Nvidia processors can give the best of themselves because the dissipation system of the ML3 is really efficient and well designed. As shown in the photo below, it consists of two fans and four heat pipes, not to mention all types of insulation. We also note that the two fans are not mounted in the same way: the first, on the left, expels calories, the other, on the right, sucks and expels air. 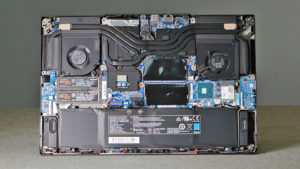 When watching a film or doing office work, the ventilation keeps silent and is triggered from time to time, for the form. As soon as you launch a game or a good big application, there, all this little world is activated. At the most, the noise emissions were measured at 41.1 dB which is … quite audible while positioning the ML3 just behind the Alienware m15 R2, the current king of silence.

However, the mercury panics a little more with more than 40 ° C on the palm rest and 57.3 ° C under the machine, all recorded in a room at 25 ° C. Given the thickness of the machine and the nature of the components present, this is not very surprising. A word of advice, don’t play with ML3 on your lap.

We expected no less from Intel: it is possible to upgrade the DDR4 memory (128 GB supported by the processor) and the storage of the ML3. Cleaning the inside of the laptop will be easy, because everything is within reach of an air bomb and other dust-collecting brushes.

Do you know our catchphrase? Being tough is not what we absolutely require from a gaming laptop. And yet, the ML3 defends itself well in our autonomy tests. Subject to our two classic usage scenarios (video viewing and versatile use), the Millenium PC lasts between 5 hours and 5:50 am. Incredible, in addition to being a good player, it can slip into a bag and accompany you (provided you do not want to play on drums and do not forget the charger). Finally, it should be noted that it recharges to 50% in just over an hour and fully in 3 hours.

The Microsoft Surface Pro 7, is it finally the perfect Windows tablet?

The Vaio SX12 offers too little for too much

the Gigabyte Aorus 17 YA, the laptop for gamers with high demands

Apple: The first tests of the MacBook Air are promising