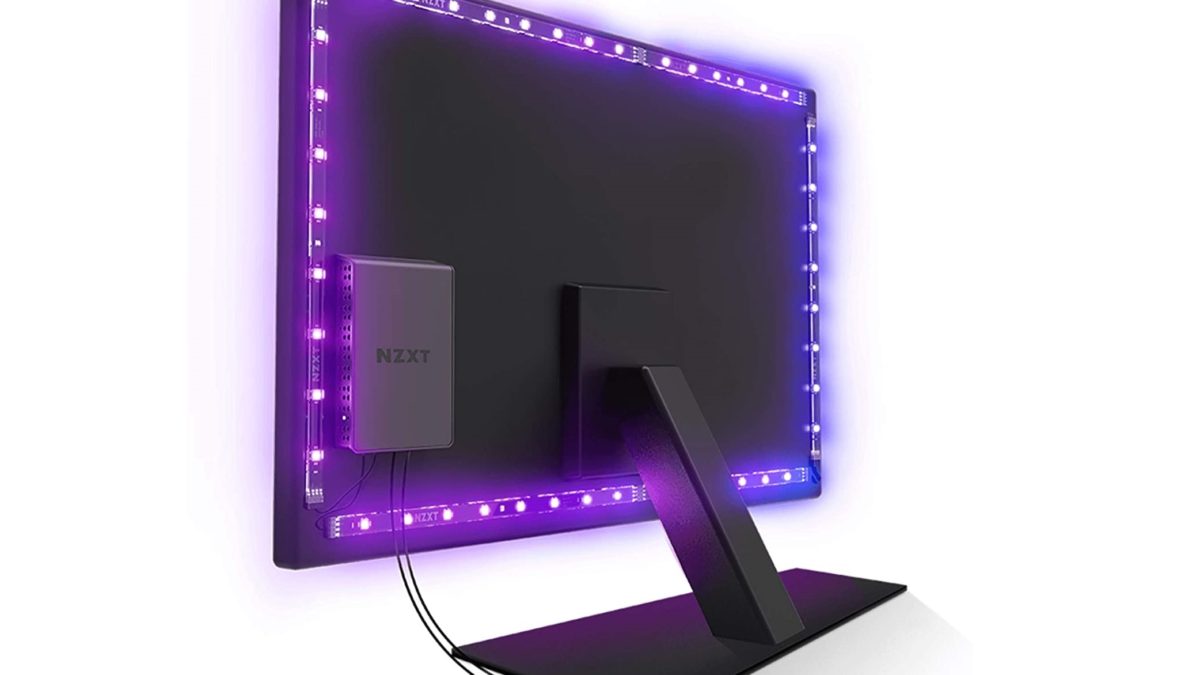 NZXT started with the design of enclosures in 2004 had made a lot of noise in dust-the design of our great big towers with the series of Phantom in 2010. The company continued its journey in diversifying a little from his activity with the integration to their catalog of kits watercooling all-in-one. The proliferation of LEDs in our daily geek brought with it the manufacturer towards the world of retro-lighting LEDs, integrate, everywhere in our setup as it is under the housing, in the housing, or as we’ll see today, behind the screen.

The box is of a size contained and lightweight. At the opening, each thing in its place in its packaging. It is carefully prepared.

In the cardboard box, we find :

Let us take a look at the control box of the backlight. It includes a power port 12V, a USB port used to receive the information of what is happening on the monitor, and finally two channels for connecting the strips of LEDs.

Before you begin, make sure you have room behind the screen to accommodate the strips of LEDs with the module. In our case, strips of LEDs going on just above the buttons of réglagesd of the screen.

For mounting anything complicated, we start by cleaning the back of the screen using two wipes provided in the bundle and begins to place the strips to use a maximum length and find the good location for the control box.

We start by putting the pieces of double sided tape on the enclosure and it is set on the desired part of the screen. We continue with the laying of the strips that are already fitted with double-sided adhesive, put the elbows to 90° and continue up to fill the 4 edges of the screen.

Once everything is in place, we’re ready to test the backlight. And frankly, it casts really ! It is powerful enough to diffuse far enough on the wall. You will notice that the ideal for this kind of system would be to have the screen hanging on the wall to make it disappear the shadow zone due to the foot of the screen.

We used a video to really judge the quality of the backlight with various effects rotation of colours (You’ll notice that we have not adjusted the contrast and brightness of the screen but everything else can catch up via the software). In looking closer, and especially in office environments, by moving a browser window from left to right of the screen, a slight jerkiness to follow the window all along the screen. This is because of a too small number of LEDs spread over the bands. If in the office it is easily visible, in game it is more difficult to see and then sortout are forgotten very quickly once immersed in the game

Good to know, to activate the Ambient, it is imperative that you have the same number of bands and LEDs but also to connect them in the same order. For example, for our test, we used 6 strips of LEDs divided into two groups. The first LED strip was not of the same length with a 200mm for the lighting on one side and a 250mm for the lighting of the bottom of the screen. Because of this, the software we were denied access to the design Ambient.

We have to put the strips of LEDs in the same order to be able to take advantage of the retro-lighting lively way Ambilight TV Philips.

The only point that NZXT could improve is to have more LEDs in strips to minimize the effect of saccade. I would therefore prefer to see a retro-lighting fixed in the office and switch on the mode “Ambient” for the video or the video game.

The mode “Ambient” is really nice for the game, not essential of course, but I must admit that the immersion is greater. For example, we can perfectly imagine to play without any lights on with this system.