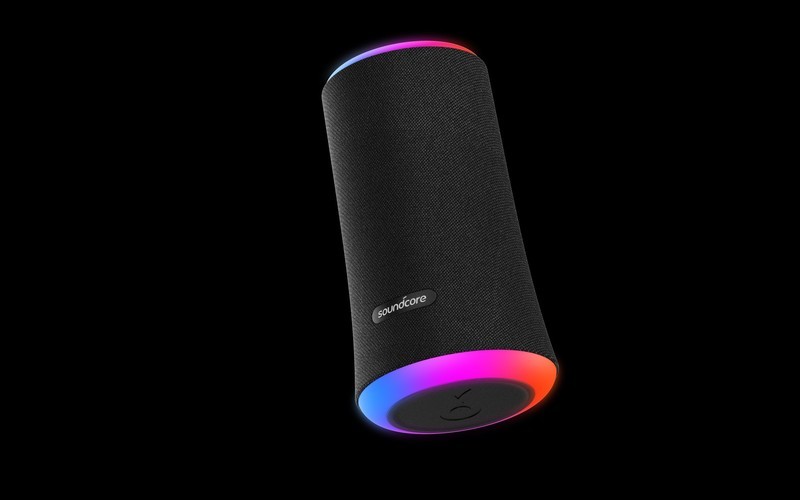 According to the visuals and the technical sheet shared by Soundcore, the Flare 2 does not radically change the formula initiated by the first Flare. The Chinese manufacturer’s portable speaker retains its tubular design and large fabric grille. However, a new light ring appears on the upper part of the enclosure, in addition to the one already present on the lower part.

The quality of the light show would have been reviewed for a better visual rendering. From now on, six light modes are proposed instead of five, with always the possibility of personalizing the led lighting and of synchronizing it with the bass of the music being broadcast. The Soundcore app still responds. The Flare 2 is IPX7 certified, and therefore able to withstand temporary immersion in water (1 m maximum for 30 min).

Any change with respect to safeguards and autonomy. Five buttons are often placed at the top of the speaker to control the volume, replay music, switch between different lighting effects and activate the BassUp mode(Low frequencies emphasis). On its Flare 2, Soundcore highlights the PartyCast mode: a feature is very close to JBL’s PartyBoost, or Ultimate Ears ‘PartyUp, which would allow up to 100 similar speakers to synchronize sound and light. They declare autonomy at 12 noon. The speaker appears to be powered by USB-C.

The manufacturer gives no hint of potential sound output variations between the first and this new edition. The Flare 2 still promises “a 360 ° sound immersive.” The two 1,75 inch speakers and the two passive radiators will ideally be up to the challenge. Here is the technical sound information which Soundcore shares.

The AirPods Pro are in promo for only 199 €, it’s never happened before