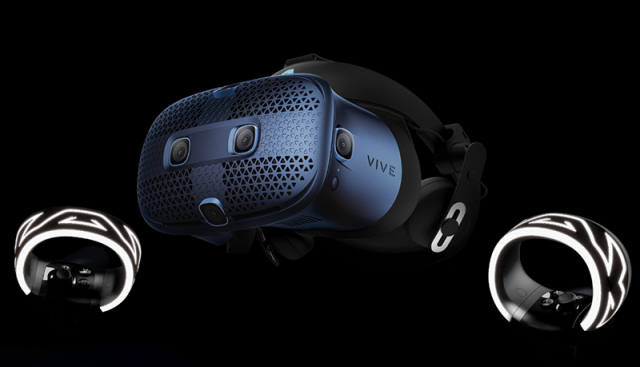 The Vive Cosmos is the fourth model of virtual reality headset for PC launched by HTC, after the original Vive , the Vive Pro and the Vive Pro Eye . It is however the very first helmet from the manufacturer to no longer rely exclusively on the SteamVR motion tracking platform: unlike its predecessors, it is equipped with an inside-out tracking system . It is therefore the cameras placed on the helmet that allow it to locate itself in its environment – in the manner of what the Oculus Rift S already offers, which turns out to be the most frontal competitor of the Cosmos. No need to get bored installing external base stations in the corners of the room; the installation and use of the helmet are therefore considerably simplified. And it is above all thanks to this simplicity that the manufacturer hopes to regain the favor of consumers, which it had somewhat lost after the excellent first year of Vive in 2016.

However, this is not the end of the story, since the greatest feature of the Cosmos is in fact its modular nature. Thanks to its removable front, it is indeed possible to add new features to it, or even to completely interchange its tracking system … and precisely, the first option offered by the manufacturer is to swap this inside-out monitoring for monitoring. Old-fashioned SteamVR – either by purchasing the appropriate front panel, beacons and SteamVR controllers (Vive Wand or Valve Index) separately, or by opting directly for the full Vive Cosmos Elite pack.

The Sony designers were definitely visionaries when they designed the PlayStation VR attachment system , with its rigid headband hanging the visor in front of the user’s eyes. Taken over by Lenovo and Oculus on the Rift S , this “halo” system, as we used to call it now, is now coming to HTC. This is certainly good news, since the Vive Cosmos, despite its high weight (645 g), is without any doubt possible the most comfortable virtual reality headset to wear from the manufacturer. This system allows the helmet to hold perfectly in place without exerting too much pressure on the face or on the nose.

However, everything is not faultless: the construction of the helmet means that depending on the morphology of each person, it may not be easy to perfectly align the visor before his eyes. So that the lenses are well centered and vertical, we may be forced to reassemble the headband, which then squeezes on the top of the skull rather than on the occiput. It is not ideal, but the comfort and the holding of the helmet on the head fortunately remain very correct even in this case.

The Vive Cosmos is equipped with two LCD screens displaying a combined definition of 2,880 x 1,700 px. This allows it to present itself, at the time of this test, as the helmet displaying the highest definition of all consumer helmets, exceeding by a hair the 2,880 x 1,600 px of the Vive Pro or the Valve Index (we put aside the 4,096 x 2,048 px of the HP Reverb , not really a helmet intended for consumers). These screens are associated with large Fresnel lenses, promising a field of vision extending over approximately 110 ° – that is to say a field of vision equivalent to those of the previous Vive, and slightly greater than that of the Rift S .

The Vive Cosmos is fitted with a series of on-ear headphones with very good performance. They produce a clear and dynamic sound, and a very beautiful transparency on the majority of the audible spectrum.It is especially on the mediums that these qualities are concentrated – and that’s all the better, since these frequencies are the most important for shaping the feeling of presence that is characteristic of virtual reality.

The extremes of the spectrum are doing a little worse, however, having apparently been the subject of compromise in favor of comfort. The generous thickness of memory foam is probably to blame for the slight irregularity of the treble, which prevents the binaural stereophonic scene from establishing itself in a perfectly precise and natural way. As for the lack of bass depth, it is the consequence of the very low pressure with which the headphones are pressed against the ears of the user.

Like the Oculus Rift S , the Vive Cosmos relies on its inside-out tracking system to provide a virtual reality experience worthy of a high-end headset, while drastically simplifying installation and the constraints of use of first generation helmets. These objectives he fulfills in a very honorable way, but with a little less ease than his rival.

It all starts with an initial configuration a little more laborious than necessary, mainly because it requires us to juggle between 3 different applications (Vive Dashboard, Viveport and Steam). The procedure for configuring the game piece is very similar to that of the Rift S: the helmet goes into pass-through mode- we see our environment inside the helmet thanks to its front cameras -, and simply ask us to draw on the ground, using one of the joysticks, the limits of our play area, inside which we can move freely. But before we can do that, an initial step is added: we are asked to help the helmet learn its environment, simply by looking around for a few tens of seconds. It is not forever, but it is enough to break the ” plug & play ” side which is supposed to be the main force of helmets with internal tracking.

In the category of VR headsets for PCs with motion tracking inside-out , the Vive Cosmos stands out as an interesting alternative to the Oculus Rift S- neither fundamentally better nor really less good, simply with different strengths and weaknesses. The HTC headset stands out thanks to its remarkably thin and faithful display, but loses points because of its movement tracking, which is significantly less precise and reliable than that of its rival.