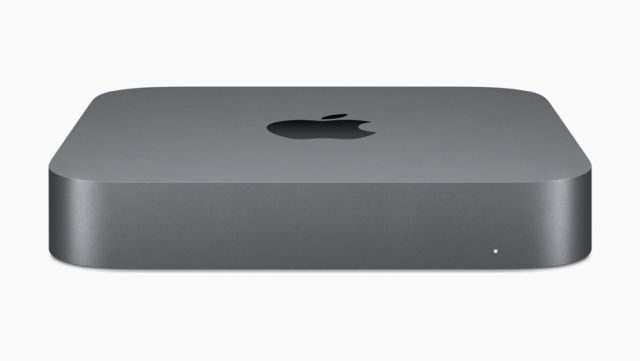 Apple renews the Mac mini with a 2020 version that does not alter the fundamentals of the compact computer. The components evolve, the concept is unchanged and the frame is made of recycled material at all times.

The latest version of the Mac mini was launched by Apple on November 7, 2018, an eternity when talking about a computer or more generally of new technologies. The firm, however, took advantage of the release of MacBook Air and iPad Pro to renew its pocket-sized computer: 19.7 x 19.7 x 3.6 cm.

The Mac mini does not seem to change in any way and maintains, according to the company, a dark gray aluminum shell composed of 100 percent recycled aluminium. Successful initiative. Usual power button, power connector, HDMI output and network jack are located at the back of the unit. There are also two USB 3.0 Type A ports, as are four USB-C Thunderbolt 3 ports. These USB-C ports can be used to connect peripherals (max. 40 Gb / s), charge or power devices , but also connect an external graphics card or two additional screens (def. max. in 4K). A headphone jack is also included.

Inside, the components evolve, but not as much as one would have hoped. Strangely, Apple did not want to use the latest 10th generation Intel Core processors and is content to repeat the use of 8th generation Core. The chips are not faster than the previous ones and keep the same frequencies, both for Core i3 (4 cores – max. 3.6 GHz), Core i5 (6 cores – max. 4.1 GHz) or Core i7 (6 cores – max. 4.6 GHz).

Apple is probably satisfied with the wireless support provided by the Intel chipset. Wi-Fi is thus limited to the support of iteration 5 (11ac), the brand skipping Wi-Fi 6 (11ax) which will however tend to become widespread in the coming months. Bluetooth 5.0 is also present.