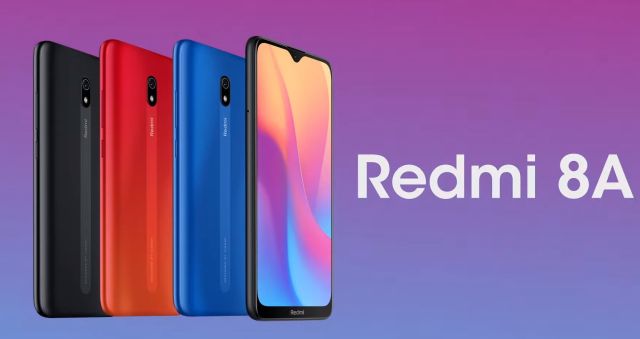 with this Redmi 8A, Xiaomi is releasing a new entry-level smartphone. The experience offered hardly changes a iota, and the phone takes almost the same technical sheet as its predecessor.

Barely more than 6 months after a Redmi 7A, Xiaomi repeats and offers an evolution of its entry-level smartphone, logically called “Redmi 8A”. Xiaomi brings some improvements without revolutionizing its low-cost product.

The Redmi 8A is a bit more expensive than the previous model. Sold, it seems, exclusively on Amazon in France for 139 € (currently 119 € for a limited time), it is in competition with the Huawei Y5 (2019), which we have already tested.

The Redmi 8A logically follows the lines imposed by its predecessors in the range, the Redmi 8 and Redmi Note 8 Pro . For a smartphone flirting with the 100 € mark, the build quality and finishes are not equal, but Xiaomi manages to offer a product of good quality.

Rather simple in its aesthetic approach, it offers on the back a striated plastic shell. A finish that is not often seen, but whose particularity is to present a better grip. Far from being exceptional, it is however less slippery or sticky than a glass shell. In the middle and over its entire length appears a strip that highlights the placement of the unique photographic sensor. No fingerprint sensor, Xiaomi seems to have overlooked this model.

At the front, the construction is very classic. The 6.2 inch screen does not cover the entire surface of the device. A notch in the shape of a drop of water is placed at the top, just like a large black band revealing the Redmi logo at the bottom. The display thus has an occupancy rate of around 84%.

The smartphone offers a 3.5mm mini-jack on the bottom edge, as well as a speaker. On the left edge is the location for 2 SIM cards and a microSD card. Finally, on the opposite edge, there are the start and volume control buttons.

The Redmi 8A has a 6.2 inch LCD panel. The definition of its screen is limited to HD + (1520 x 720 pixels) and its ratio is 19: 9. By default, the display is fairly well calibrated, but it is possible to obtain a slightly better result thanks to the display parameters. To do this, select the “Original color” option, which provides a color temperature raised to 7,129 K. A sum value very close to the video standard (6,500 K). For colorimetry, we measured a delta E of 2.5.

There are colorimetric drifts on the RGB tones which exceed a delta E of 4 or even 5. The rest of the set is contained under a delta of 3 – the limit perceptible by the human eye.

The maximum daylight is not optimal and peaks at 361 cd / m2. However, this allows easy reading in the sun, especially since the display manages reflections very well with a reflectance rate measured at 45%. However, at night, its minimum brightness of 1.1 cd / m2 is almost excellent.

The version of the Redmi A8 sold by Amazon France is clearly not the most powerful in the range. Equipped with the Snapdragon 439 (like the Redmi 7A), the Redmi A8 benefits from 2 GB of RAM (a version with 4 GB exists, but not on the French market). A configuration that does not dream, and especially that does not prove to be really powerful.

Few devices do not pass our performance test implemented last summer. On the 4 multitasking management tests that we carry out, the Redmi 8A has validated only 3. Impossible for him to pass the last test. Too bad, especially since his predecessor had been able to.

Let’s finish with the contrast ratio which is 1,565: 1, a value slightly higher than what LCD panels normally offer. The remanence time is 17 ms and the tactile delay is 67 ms.

We note that between the version tested today and the Redmi 7A, there is almost no difference in terms of performance. In game, it is the same result while in multitasking, the 2019 edition manages to do a little better, without this being significant. Huawei’s Y5 (2019) is far behind.

This Redmi 8A is housed in the same boat as its predecessor. In fact, it only has a single 12-megapixel rear sensor. Strangely, in certain markets only, Xiaomi offers a version of its Redmi 8A with 2 sensors on the back.

No surprise, this Redmi 8A is the worthy heir to the Redmi 7A – which was itself that of the Redmi 6A. Xiaomi does not change its formula and therefore offers an entry-level smartphone of good quality with what it takes to satisfy users. The performance and the photo are a little below, but in this price segment, this is not surprising. Faced with the Huawei Y5 (2019) , the Redmi 8A is doing much better.