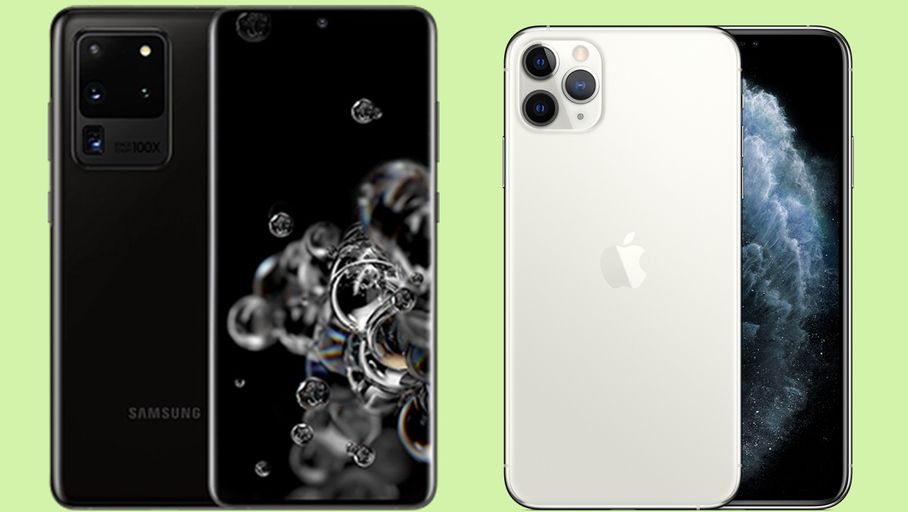 The Samsung Galaxy S20 Ultra has reached a milestone in mobile photography with its 108 megapixel sensor and its 100x zoom. But what is this new smartphone worth compared to the iPhone 11 Pro Max, one of the best in its class?

Goliath versus Goliath. These two smartphones are very large and imposing. On the Samsung side, there is a 6.7-inch panel in 20: 9 format; on the Apple side, a 6.5-inch display in 19.5: 9 format. The one-handed use is complicated in both cases, and perhaps even a little more with the Samsung smartphone which offers a screen all in height. However, this has a definite advantage: the occupancy rate of the slab is quite high. That of the S20 Ultra occupies 91.14% when that of the iPhone 11 Pro Max covers only around 85%. This larger surface is also explained by the fact that the S20 Ultra is devoid of a notch, in favor of a punch. It is also well helped by its curved edges. On the back, it’s more or less the same philosophy. Samsung had to give in to the trend ”
For finishing, make room for glass with the two manufacturers. But at Apple we prefer it frosted, which gives it a much nicer touch than that of Samsung.

For unlocking, Apple offers Face ID, a solution that requires your face to access your iPhone. On the S20 Ultra, there is an ultrasonic fingerprint reader.

Finally, in terms of connectivity, there is only a USB-C Samsung port and a Lightning at Apple, the mini-jack 3.5 mm port having disappeared from the Note 10 range of the South Korean manufacturer.

Samsung has always had this ability to offer exceptional displays compared to Android competition. If you take a closer look, you will realize that the two screens are really very close. Both offer an Oled panel. On the S20 Ultra, the maximum definition is 3,200 x 1,440 pixels while the 11 Pro Max reaches 2,688 x 1,242 pixels. Both are extremely well calibrated, with a slight advantage for that of the Apple. The iPhone 11 Pro Max benefits from a better Delta E (1.3 against 2), a better equivalent temperature (6 589 K against 6 597 K) as well as better management of reflections (48% against 52 , 9%). In the end, the only segment or Samsung’s smartphone wins, it is on its maximum brightness which reaches a peak measured at 835 cd / m², while we have measured at 735 cd / m² on the iPhone. However, there is one thing to take into account that the iPhone does not have: a refresh rate of 120 Hz. Unfortunately for the Apple smartphone, this is a rather important point since all the new flagship models tend to propose a screen refresh located between 90 and 120 Hz.

As we raised in our duel iPhone 11 Pro Max against Galaxy Note 10+, it is difficult with our protocols to compare the performance of an Apple smartphone against an Android smartphone. With its Apple A13, the American company shows all its know-how in terms of optimization. So much so that the processor manages to stand up – when it does not simply exceed – almost all smartphones released after it. We expect a lot against the Snapdragon 865 and it could have been a great match if Samsung did not persist in offering an Exynos 990 processor on its European models. Even if the house processor of the South Korean firm is doing better than in other years, it is simply not enough to reach the level of the iPhone 11 Pro Max.

The premium smartphone of the S20 range passes a milestone in photography. Heavy artillery is out and has enough to shake the iPhone 11 Pro Max.

By day, contrary to what we might have thought, the S20 Ultra does not completely harm the iPhone 11 Pro Max. Apple’s smartphone offers warmer color rendering, while Samsung’s software processing overexposes the scene. The Galaxy S20 Ultra retains better homogeneity on the whole scene. This is particularly true on the lower left corner.

The two smartphones do not really excel with the ultra wide-angle. Overexposure is still strong at Samsung, but as with the main sensor, color reproduction is much better managed than on the Apple smartphone.

As for performance, it is difficult for us to compare the autonomy of the two devices since the protocols are not the same. With its 16 h 44 min, the Samsung smartphone is doing pretty well compared to the Galaxy S20, for example. For the iPhone 11 Pro Max, it takes 15 h 41 min of autonomy. A very good score for the Apple model, whose smartphones were not previously praised for their long-lasting battery. On the autonomy match, we have to recognize the equality between the two challengers. They will both offer at least 2 days of autonomy before having to be recharged.

Even if the iPhone 11 Pro Max does not deserve, it is quite natural that the Samsung Galaxy S20 Ultra is essential at the end of this duel. Samsung’s most premium smartphone is a true technological showcase that has arguments that the Apple model simply does not have. Refresh rate at 120 Hz, ultra fast charge, and even 5G compatibility. This last point alone could determine the winner of this duel since it will ensure the sustainability of the S20 Ultra. When the network is fully deployed in our territory, owners of an S20 Ultra will be very happy to be able to take advantage of it; those who will have an Apple 11 Pro Max, a little less.

The legendary Nokia 3310 back soon?