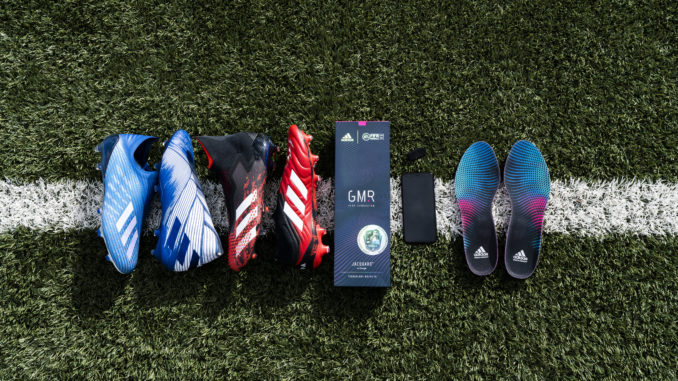 New collaboration for Jacquard teams at Google. By partnering with Adidas, they helped develop a connected sole for soccer players. For its part, EA Sport has imagined interactions with the game FIFA Mobile .

Google’s Jacquard initiative was born with Levi’s Trucker Jacket , a Bluetooth-connected garment that allows you to control certain smartphone functions by touching your wrist. Today, we discover another collaboration: Google has partnered with Adidas and Electronic Arts, not to prove the overwhelming superiority of Messi over Ronaldo (no need for that), but to imagine the GMR, a connected sole making the link between football practice and video game.

Marketed at a price of € 34.99, the Adidas GMR – usable with any type of shoe – measures the distance traveled by footballers, their speed spikes, as well as the power of their strokes, before transcribing all of this data in the FIFA Mobile game . It is thus possible to unlock certain special content, but also to improve the general score of your Ultimate Team in the game, by taking advantage of your training sessions or football matches “in real life”.

In the other direction, the FIFA Mobile game offers various challenges to the owners of the soles to encourage them to go out and play football. For example, to unlock the Master Finisher challenge, you will need to shoot 40 penalties in a week, and the most powerful ball hit will appear in some rankings.

An original product, backed up by learning algorithms

“Adidas has set itself the goal of continuously offering innovations that allow players to improve, whatever their game or sport of choice […] By questioning traditional approaches to product development in collaboration with Jacquard by Google and EA Sports FIFA Mobile, we are able to offer players a completely original way to put their creativity at the service of their sport, ” comments Moritz Kloetzner, director responsible for business development at Adidas Football.

At Google, we are obviously pleased to have been able to convince a new big brand to try connected clothing as part of the Jacquard program. “Jacquard by Google is a mixture of interactivity, connectivity and artificial intelligence integrated into everyday objects […] Thanks to advanced machine learning algorithms, we have trained the Jacquard tag placed in your shoe to recognize movements you make in the field in order to reward yourself with a gaming experience ” , specifies Ivan Poupyrev, director of engineering at Google.

The wearables , market struggling to take off

To date, we do not know how many Levi’s connected jackets have sold, knowing that the price difference between a normal Trucker Jacket and its “smart” version is around 20 €. With GMR, the approach is different, being an accessory dedicated to a very specific practice offered at a more affordable price. It will be interesting to see if such a product is a real success, and what other partnerships Google will pass to surprise us in the field of wearables .

According to Statista , connected clothing weighed $ 14.5 million worldwide in 2019 and – despite some past forecasts promising this market to grow at a dazzling rate – it should represent “only” $ 15.4 million this year , and $ 17.9 million in 2024.