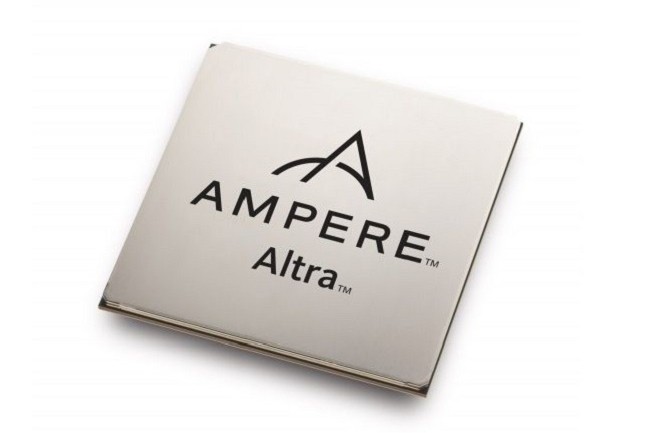 Based in Santa Clara, California, the Ampere start-up founded in 2017 by Renee James (28 years old at Intel), arrives on the high density server market with two mono and bisocket solutions based on ARM 80 core chips called Altra.

For several years – the introduction of Seamicro high density servers in 2009 in fact – ARM chips have been trying to break into the server market. Supercomputers and cloud service providers have also bet on these chips, less efficient than the Intel Xeon or AMD Epyc series, but much more energy efficient. Chinese Huawei, faced with the American embargo on software and components, is also developing a range of servers and a line of storage arrays based on its ARM64 Kunpeng 920 chips associated with its Linux EulerOS distribution.But it is not yet known whether Huawei will be able to impose what neither SeaMicro, neither Dell, nor HPE ( Moonshot ) and neither Lenovo with Nextscale have succeeded with their ARM servers (32 and 64 bits). However, the situation is changing with the initiatives of Amazon (Graviton 2) and the start-up Nuvia which are also pushing ARM on servers.

The arrival of the Altra chip with 80 cores (3 GHz in turbo mode),developed by Ampere Computing with the assistance of Applied Micro, may well be a game-changer. Available in mono (Snow server) and bisocket (Jade server), this processor engraved in 7 nm and of SoC type consumes 210W, which does not really make it a low consumption chip. Each Altra core (ARMv8.2 +) has a L1 cache of 64 KB and L2 of 1 MB, while the central unit is supported by a L3 cache of 32 MB. The 80 cores of the chip are linked via a coherent mesh interface, but Ampere does not provide details on this architecture and some explanations seem hazy.

The Altra platform supports up to 8 channels of DDR4-3200 RAM per chip (4TB of memory supported per socket). Like the Epyc, it offers 128 PCIe 4.0 lines per processor and uses 32 for a socket to socket connection in a two-way configuration, which allows to have 224 PCIe lines in a bisocket system. This is particularly interesting for storage solutions using the NVMe protocol. For its part, Intel still caps at 48 lines with its latest Xeon Scalable Cascade Lake Refresh .

The two servers offered by Ampere, mono socket with the Snow 1U model and b-socket with the Jade 2U, are currently being evaluated by cloud service providers. Only downside, the start-up does not yet provide a price list for its servers, which makes comparison with x86 solutions on the market (Dell, HPE, Lenovo or Supermicro) difficult.The firm, on the other hand, is much more expansive about estimates of the performance of its products. The Altra chip with 80 hearts would surpass an AMD Epyc 7742 processor and even the Xeon Platinum 8280. Beyond the good performance, which will have to be validated by an independent body, it is also necessary to focus on the software ecosystem, OS and compiler, and there Ampere can count on the support of ARM which has invested a lot on Linux and parallelization. However, the battle is far from won and the first market for Ampere servers will be that of cloud services which can make the most of the capacities of these machines.

To conclude, let us recall that Oracle invested $ 40 million in Ampere Consulting. This financing took place last April and represented less than 20% of the company’s outstanding shares. Note that in addition to this announcement, Ampere Consulting CEO Renée James was appointed to the Oracle Board of Directors. The manager is no stranger, she spent 28 years at Intel where she served as president from 2013 to 2016. Since 2015, she was on the board of directors of Oracle.