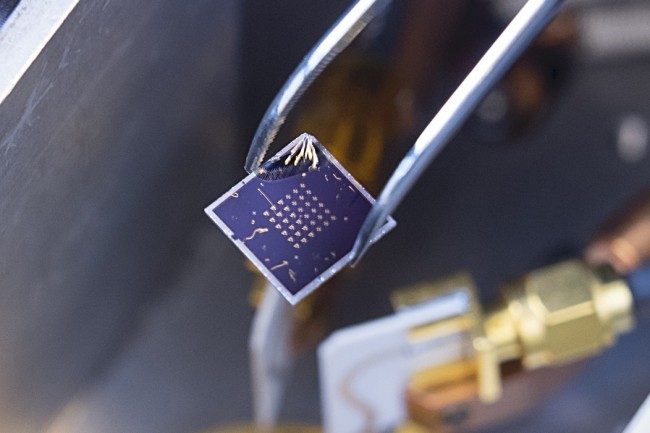 Researchers from Purdue University, West Lafayette (Indiana) have announced breakthroughs in an area that seemed impossible to achieve : build a comosant able to both process and store information. Tomorrow, a chip-type SoC may integrate the processing functions (with transistors) and storage capacity (with RAM ferroelectric), creating potentially a combination of processor-memory that would speed up the calculation. In addition, its thickness would not exceed that of an atom.

Concentrate more functions on a chip while increasing the speed and power, without increasing the footprint, is one of the fundamental goals of designers of electronic components. To achieve this, the engineers from Purdue had to overcome the incompatibilities between transistors – the switching mechanisms and amplification used in almost all electronics – and the ram is ferroelectric. The RAM ferroelectric is a technology of memory more efficient : the material introduced to the non-volatility, which means that it retains the information in case of loss of power, contrary to the typical DRAM built on a dielectric layer.

These conflicts between materials to prevent long-the design of SoC incorporating the transistors and of the memory. “For decades now, the researchers are trying to integrate transistors and memory, but problems arise at the interface between the material ferroelectric and the silicon, this semiconductor material used to transistors.

“The RAM ferroelectric behaves as a separate unit on the chip, which limits its ability to make the computation much more efficient,” explained researchers from Purdue, in a press release. A team of engineers from Purdue, led by Peide Ye, has found a solution : “We used a semi-conductor having properties of ferroelectric. In this way, the two materials are only one, and it no longer has to worry about interface problems “, further explained Peide Ye, also a professor of electrical and computer engineering at the university of Indiana.

The solution found by the engineers of Purdue revolves around a material called selenide indium alpha. The latter has properties that are ferroelectric, but without the limitation of the material ferroelectric classic, which usually acts as a insulator and will not allow the passage of electricity. The selenide indium alpha can become a semi-conductor, which is necessary to the element transistor. It is also a component of ferroelectric stable at room temperature, can operate at low voltage, which is necessary for the RAM ferroelectric. “The selenide indium alpha has an energy band gap smaller than that of other materials “, further explained the university. Away from bands, or bandgaps, refers to the space in which no electrons can exist. This band-gap is reduced, as found from native material in the material, means that it is not completely insulating, and that it is not too thick for the passage of electric current – and there is always a layer of ferroelectric. The band-gap-reduced ” allows the material to be a semi-conductor without losing its properties ferroelectric “, according to the researchers of Purdue. “Thus, one obtains a field effect transistor semiconductor ferroelectric, constructed in the same manner as the transistors currently used in computer chips “.