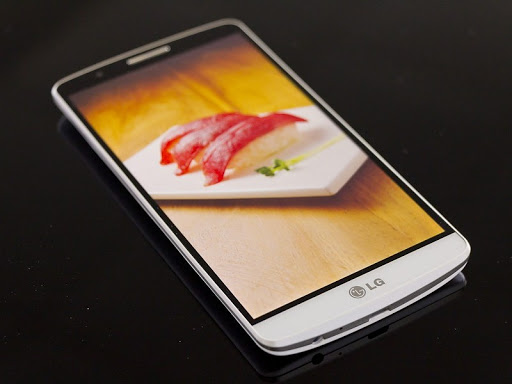 It might be late to the party, but LG’s G3 has made a grand entrance with a stunning Quad HD screen The LG G3 is the follow-up to our favourite smartphone of last year, the LG G2. At just 8.9mm the G3 is thinner than the 9.1mm G2 — an impressive feat, given the extra tech LG has squeezed in. At 75x146mm in size, however, the G3 is a large phone. LG has done a great job in reducing the bezel and squeezing in a 5.5in screen. Nevertheless, we find the Sony Xperia Z2 somewhat unwieldy and the G3 is in the same category, even if LG says the handset’s ‘floating ark’ shape makes it easy to use the phone one-handed.

It’s no surprise that the G3 has gained some weight — but not a great deal, at 149g up from 143g. A big design shift is the move from a plastic- to a metal finish, although this is just a skin and not real metal as seen in the HTC One M8. This brushedmetal- effect case looks and feels nice, but we’re less enamoured with the white version. The G3 is available in black, white, gold, burgundy and violet. As before, LG has placed the phone’s physical buttons on the back next to the camera. We weren’t sure about this when it was introduced on the G2, but you quickly get used to it and it makes a lot of sense. While some devices on the market are dust- and waterproof, the G3 is not. LG didn’t want to make the device bigger and heavier to gain this feature.

The screen is the most important update to LG’s flagship smartphone. It’s the first phone to offer a Quad HD resolution – full-HD is the standard.
Whereas the Samsung Galaxy S5, Sony Xperia Z2, HTC One M8 and other top-end smartphones’ screens max out at 1080×1920, the LG G3 cranks things up to a whopping 1440×2560.
It’s named Quad HD because it’s four times the resolution of 720p. The LG G3 has a 5.5in display (a little larger than the G2’s 5.2in), resulting in a massively high pixel density of 534ppi.
The previous record holder was the original HTC One with 469ppi. This display looks absolutely stunning when compared to full-HD.
LG says the display is comparable to a high-quality photobook. The only down side is the negative impact a large, high-resolution screen might have on battery life.
LG fits a 3,000mAh removable battery and says it’s countered excessive drain with adaptive framerates, clocking and timing control, but we need to get the G3 into our lab and run some tests to be sure.

Processor and RAM of LG G3

There were rumours of an Octa-core processor, but LG has plumped for a Qualcomm Snapdragon 801 chip, matching rival handsets on this front.
The chip is clocked at 2.5GHz and includes an Adreno 330 GPU. The 32GB version of the LG G3 has 3GB of RAM, while the 16GB model has 2GB. Unsurprisingly performance is smooth and nippy; we’ll be able to provide benchmarking results once we’ve spent some more time with it.
A drawback of LG’s last flagship smartphone was a lack of expandable storage, but the firm has fixed this problem with the G3, now providing a microSDXC slot that can accept cards up to 128GB in capacity.

The G2 had strong connectivity options with dual-band Wi-Fi, Bluetooth 4.0 LE, NFC and an IR transmitter. It also supported 4G LTE, which the G3 takes a step further with LTE-Advanced, plus it supports the latest 802.11ac Wi-Fi and wireless charging. The G3 sticks with USB 2.0 because a 3.0 port is bigger and uglier, plus LG says consumers don’t use it much anyway.

The LG G2 pleased audiophiles as the first smartphone to support 24bit/192kHz playback.
LG has improved things on this front with a 1W speaker and a ‘boost amp’. Our only quibble in this department is that the speaker is rear-facing. 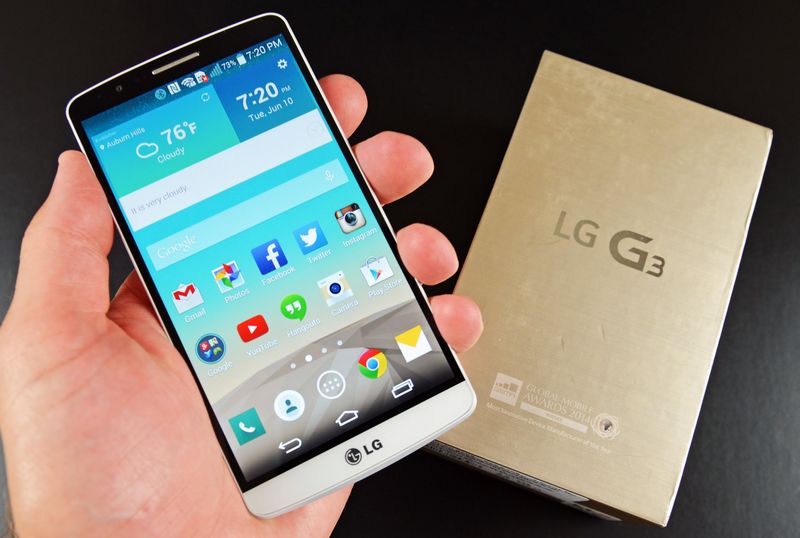 The resolution of the G3’s main camera is still 13Mp, but a number of improvements have been made. For starters, there’s a dual-LED flash, which should come in handy in low light situations.
More impressive is the inclusion of 4K-resolution video recording. And while 4K isn’t a new feature in smartphones, the G3’s ‘Laser’ auto focus is.
The G3 also includes optical image stabilisation technology to keep shots shake-free, plus something called ‘Touch & Shoot’, which removes unnecessary buttons so you can concentrate on getting the right shot. At the front is a 2Mp camera that LG refers to as a ‘Selfie camera’.
It can shoot full-HD video and automatically capture an image following a hand gesture. The pixels are larger than those of the rear camera, the angle has been optimised for selfies and the screen can be used as a makeshift flash.

The LG G3 runs Android 4.4 KitKat and the firm’s latest user interface and software features, including KnockCode, which lets you wake and unlock the device with a user-defined knocking pattern.
KnockON is here, too, able to wake or turn off the screen with a double-tap. New features include ‘Smart Notice’, which is similar to Google Now.
In essence the G3 will make suggestions and offer tips based on the status of
“The camera angle has been optimised for selfies and the screen can be used as a makeshift flash”
the device, taking into account your location and behaviour. For example, the G3 will ask if you want to uninstall apps that haven’t been used in a while, if you want to call back someone from whom you have a missed call, and if you want to switch on Wi-Fi when you arrive at the office.
A slim keyboard can be size-adjusted and supports new gestures. It automatically adjusts the detection area as you type and you can swipe the space key to move around the cursor.
Overall the interface is simpler and cleaner.
LG says it has removed all unnecessary visual elements and apps are colour-coded so you know where you are. It’s flat and the colours used are mature, says LG.