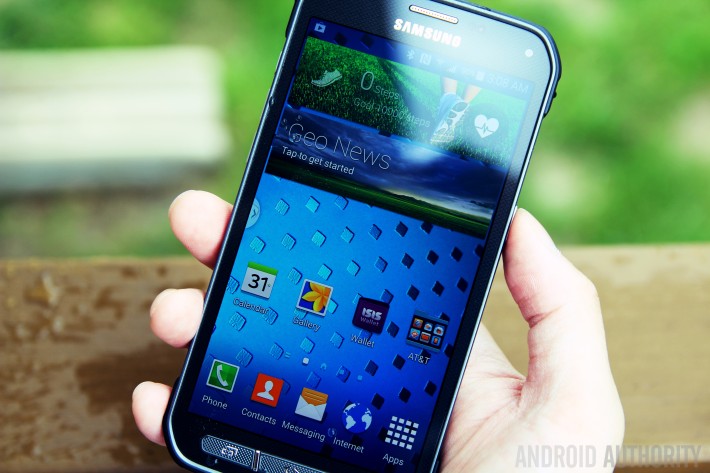 The Samsung Galaxy S5 Active S5 is already dust- and waterproof, but apparently it still isn’t rugged enough for some users

When Samsung released the Galaxy S4 it followed up the popular handset with four slightly different versions that appealed to a range of users. We had the S4 mini, a more compact, less powerful handset that also came in at a slightly cheaper price; we had the S4 Google Play Edition, which ran a vanilla Android OS; there was the S4 Zoom, which featured a 16Mp camera; and then there was the S4 Active, a dustproof, waterproof, rugged version of the standard Galaxy S4 designed for those with an active lifestyle. 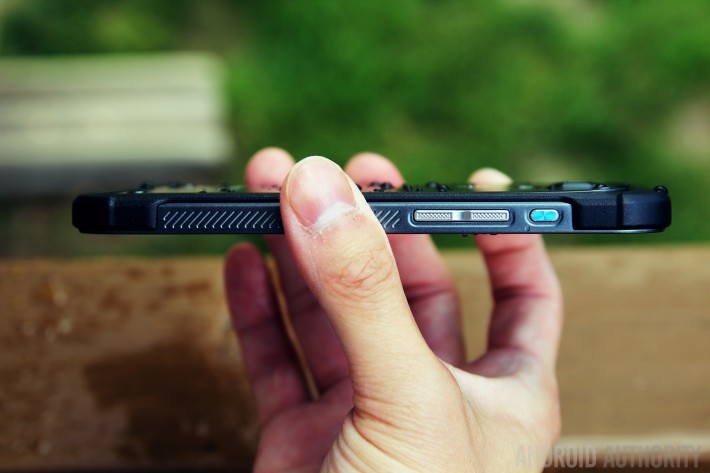 The Galaxy K Zoom has already been announced, and there have been rumours of an S5 mini (see previous article) and a new S5 Prime (see next article). But we had assumed, given the Galaxy S5’s dust- and waterproofing credentials, an Active version would not be required. Isn’t the Samsung Galaxy S5 already a rugged smartphone? We were wrong, it would appear, according to several videos posted on YouTube by TK Tech News.

Samsung’s Galaxy Premiere press event is scheduled for 12 June in New York. We wouldn’t be surprised to see the Samsung Galaxy S5 Active make its appearance at this event, making it likely that the S5 Active will be available to buy in the UK by the end of June. After all, at last year’s Premiere event we saw the appearance of the S4 mini, Active and Zoom.

The only major differences between the Galaxy S4 and Galaxy S4 Active were its slightly sturdier (by this we mean slightly chunkier, taller and heavier), water- and dustproof body, lower camera resolution 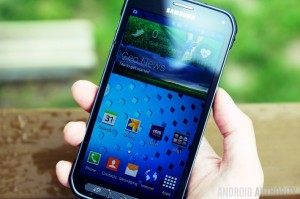 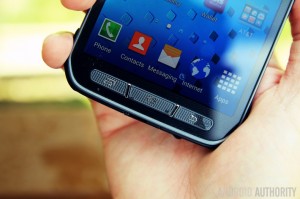 (8Mp vs 13Mp) and underwater photography mode, plus three plastic hardware buttons on its front. From the videos we can see the Galaxy S5 Active retains the Galaxy S4 Active’s hardware buttons, plus you can see S5-specific features such as the heart- rate sensor. Once again, it looks a little larger than the standard version, and features a metal (possibly aluminium) chassis with hard rubberised corners to protect against damage. The rubber waterproofing seal is deeper than that of the standard S5, suggesting it will survive longer underwater.

As is seen in the video, the Samsung Galaxy S5 Active is running Android KitKat 4.4.2 and has the model number SM-G870A. A device known as the Samsung SM-G870 is listed in the GFXBench results database, where it is said to be running a 2.5GHz Qualcomm Snapdragon 800 processor with Adreno 330 graphics, 1.8GB of RAM and 11GB of storage (that’ll be 16GB minus KitKat and Samsung’s additional software), which are in line with the Samsung Galaxy S5 itself. However, GFXBench suggests it has a 5.2in (1920×1080) screen and a 15Mp rear camera (the standard S5 has a 16Mp model).

These are promising specs, given that the previous S4 Active featured a lower-quality LCD screen and its camera halved the number of megapixels offered by the standard S4. TK Tech News believes both to be AMOLED screens. In the GFXBench T-Rex test the S5 Active scored 28fps, and it managed 12fps in Manhattan. These are identical to our own results for the Samsung Galaxy S5, which again suggests not much has changed on the hardware front. In the Geekbench 3 test, TK Tech News has shown the Galaxy S5 Active scoring 952 points in the single- core test, and 2,878 points in the multi-core test. This is actually very slightly faster than our own benchmark results for the Samsung Galaxy S5.

New features Although the hardware specs remain largely the same, the Samsung Galaxy S5 Active does have another feature in addition to the standard Galaxy S5: an Activity Zone and dedicated Activity Key. According to yet another video posted by TK Tech News, the Activity Zone holds features exclusive to the S5 Active, including a shortcut to S Health and access to the phone’s compass, barometer, stopwatch and torch features. The Activity Key button itself can also be used to snap a photo with a long press.