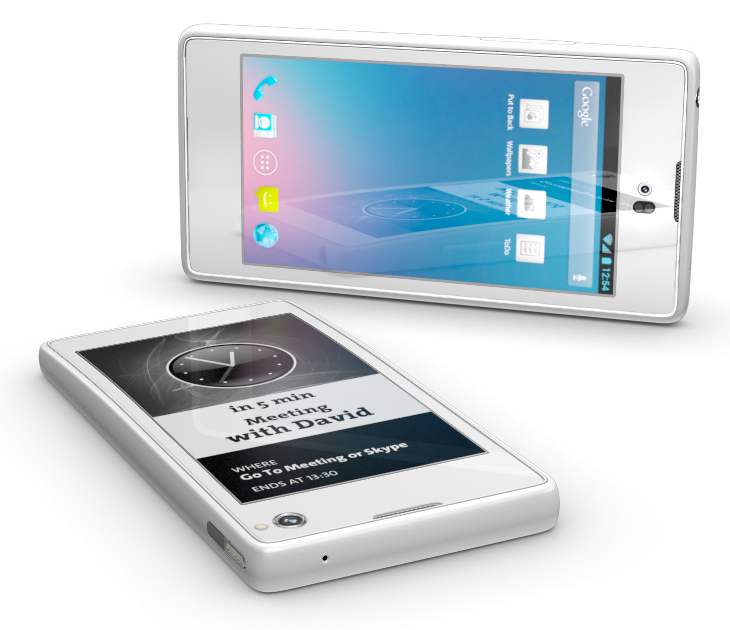 The Yotaphone, THE first dual-screen Android smartphone to combine a traditional LCD screen with a second eInk display, has gone on sale in Europe, and will be coming to the UK soon. St Petersburg-based Yota, which was previously best known for making modems and routers, has developed the phone specifically to combat baΞery drain.

According to the company, the always-on eInk display will have up to 10 times the battery life of other smartphones. “The typical user picks up and activates their smartphone more than 150 times a day,” Yota Devices CEO Vlad Martynov said at the launch event. “By including a second screen that uses electronic paper display technology, users have access to the information they want and need on a continual basis without having to wake up their phone.” While the 4.3in, 1,280×720 resolution LCD display on the front will be used for most tasks, notifications, maps, books and other specifically adapted apps will appear on the 4.3in, 640×260 eInk display on the rear.

The handset runs a customised version of Android 4.2 Jelly Bean, which heavily relies on BlackBerry-style swipe gestures to navigate through the operating system. According to early reports it feels fiddly at first, but we said the same when we tried BlackBerry’s BB10 OS for the first time. Specifications aren’t exactly top of the range: the Yotaphone is powered by a previous-generation Qualcomm Snapdragon S4 Pro processor and 2GB of RAM, although it does include support for 4G networks and has a 13-megapixel rear camera. The eInk display even tells you to smile when taking photos, although you’ll have to be careful not to block the lens – it’s near the bottom of the handset, rather than near the top, so as not to block the rear display.

The Yotaphone costs €499 (around £420), putting it on par with handsets from brands such as Samsung and HTC. Having already sold its initial run of pre-ordered handsets in Russia, Austria, France, Spain and Germany, Yotaphone is now taking orders for the second batch of units and will introduce the phone to the UK by March 2014.